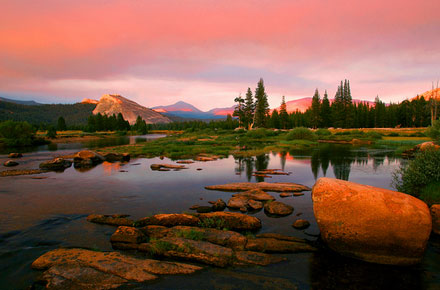 Yosemite National Park Superintendent Don Neubacher announced today that the names of several buildings and facilities within the park will be renamed to eliminate potential trademark infringement issues with the current concessioner of Yosemite, DNC Parks & Resorts at Yosemite, Inc. (DNCY), a subsidiary of the Delaware North Companies. The name changes will impact several iconic buildings and landmarks listed on the National Register of Historic Places.

After a prospectus document that announced the contract availability was released in July 2014 and the offers were reviewed, the National Park Service selected Yosemite Hospitality LLC, a subsidiary of Aramark, to be the new primary concessioner in Yosemite National Park. The concessioner provides lodging, retail, recreational services, and food to over four million annual visitors to Yosemite. Because the current concessioner, DNCY, claimed ownership and the right to payment for tradenames, trademarks, and other intellectual property that it argues is worth over $50 million, the National Park Service included the option to change the names of these sites as part of the prospectus.

“While it is unfortunate that we must take this action, changing the names of these facilities will help us provide seamless service to the American public during the transition to the new concessioner. Yosemite National Park belongs to the American people,” stated Neubacher. “This action will not affect the historic status of the facilities, as they are still important cultural icons to the National Park Service and the public. Our stewardship of these properties is unwavering.”

The new names were chosen in order to minimize the impact on visitors and include:

Yes, this irks me a little. Ownership of the names should have been something the National Park Service managed due to the historic nature of the properties. Letting DNC manage the names is irresponsible in my book. Sure would suck if they had to change the park name from Yosemite National Park now wouldn’t it?

Tell us what you think by dropping a note in the comments below.