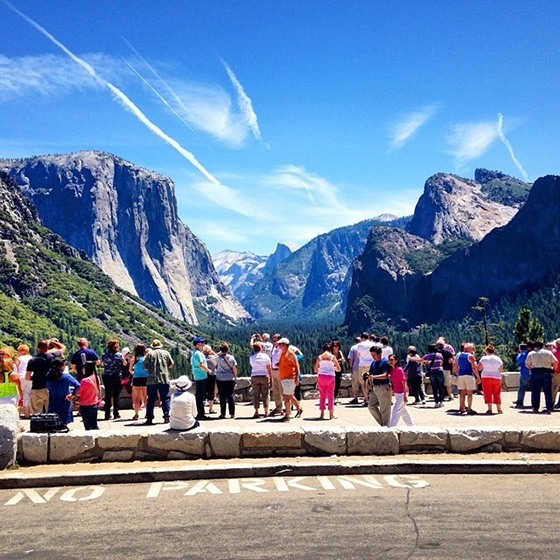 Some times you have to wonder about what people were expecting when they came to Yosemite. Quick disclaimer, I don’t work for the National Park Service or any of the concessionaires so don’t expect me to not make fun. The views expressed here in are mine and represent no one else. Enjoy the freak show!

Wow! I’m…uh…wow. Seriously though, your best bet is to park OUTSIDE the park in Mariposa or Oakhurst or Groveland and take the YARTS bus into the park then take the FREE valley shuttles from destination to destination or walk. I’m not really sure what tram tickets would cost $150.

Huh! I always thought that’s what happened to the waterfalls in summer. I wonder where the shutoff valve is. We’ll try to put the sites closer together for you at our next National Park, Misty. Hope that helps.

Our final 1 star review of Yosemite is from Kevin from Woodland Hills, Ca.

Kevin’s comments were too long to screenshot so here’s his post in it’s entire glory.

“I have only one word that can sum up my experience at Yosemite : Disappointingly pointless and heart-breakingly awful.

Let me start off by saying I have nothing against nature. I have house plants for a reason. A girl (who I’m trying to get out of the friend-zone with) thinks my studio apartment looks empty with just a twin bed. She suggested she’d be more comfortable hanging out at my place if there was another place to sit and suggested I buy a chair. So I called her to tell her that I bought a chair but she said she can’t come over because it’s stuffy and I should buy plants. I went to Home Depot and I bought 3 of them. So now I have house plants. I take good care of them so that they’ll still be alive when she finally comes over again.

She still never came over. Cause, she said, she’s trying to spend more time in the outdoors… so I decided to invite her to Yosemite because of all the plants. I read online that it’s outdoors. Perfect. After inviting her over many months, she finally said yes. She said she appreciates my desire to explore new things and she doesnt want to be responsible for me losing an exciting new side of myself.

So you can imagine all of my anticipation of this trip. I bought a bunch of camping gear. A tent, a sleeping bag for 2, a space heater, rappel gear, helmets, a bbq, an adventure hat, an acoustic guitar, condoms, and roses (to sprinkle petals inside of the tent). I thought I’d buy folding camping chairs too, but then I thought no, I’ll bring the chair I bought for my apartment to prove to her that I bought one. It didn’t fit in the backseat because of the new space heater, so I had to strap it to the roof of my car.  Which is fine because I own a LOT of bungee cords. I swear I’m not bragging about that. I’m just that kind of guy.

Before I left, I googled camping songs and I loaded as many as I could to my iPod & I learned how to play the guitar before I hit the road.  She wasn’t in a good mood when I picked her up. She tried to be, but she said she has migraines and she just wanted to sleep. The car ride to Yosemite is very long. Too long. I haven’t seen anybody else on yelp mention how long the drive is so I thought, this should be known to all : If you plan on coming to Yosemite with the love of your life, and she has a migraine – you’re going to be awake by yourself, listening to camp songs for a very long time. 🙁

When we got there, I was surprised to see that the campground was very dirty. Not trash or anything. Just the ground was dirty. If you’d think an attendant would do something about that – you’re wrong. In fact they’ll just look at you like you’re joking and walk away.  It was rude and embarrassing.  I set up the tent and unboxed the space heater while she waited in the car and put the chair next to the fire pit. I figured later that night she’d sit in my lap while I played the guitar for her.

We decided to go on a hike up a mountain which was a very long walk and incredibly stupid because there’s nothing to talk about the entire way up. For what feels LITERALLY like miles. And when you finally get to the top of the mountain, you’d think there’d be something rewarding to do. Think again. When you get to the top – oh look. More mountains that I don’t want to climb in silence. The one good thing about the mountain top is you can see a lot of plants and point to them. But if you expect your one true love to hold your hand and experience a plant inspired euphoria, I have some disappointing news for you. Not only will she not hold your hand, she’ll go sit by herself on the other side of the mountain top. That wasn’t in the brochure, Yosemite.

When night finally came, it was really cold. There was no place to plug in the space heater, and it was taking up half of the tent. So I’ll be returning THAT to Home Depot. We made dinner in silence and she drank a lot as we listened to the sound of other campers pretending to enjoy themselves and decided just to go to sleep and end the disappointing day.  I thought to myself how exciting, we finally are going to share our first embrace. But Yosemite foiled me again. No bleeping wifi. How was I supposed to get her in the mood if I couldn’t play her my camp song playlist. She had her own sleeping bag because she said she’s allergic to the fabric mine is made of and we went to sleep.

The next morning I decided to surprise her at sunrise with a love song outside of the tent. I’ll preface this by saying i practiced for days. I got my guitar, stood in the tent doorway and started singing a great Jack Johnson song and you wouldn’t believe what happened. Other campers started acting very rude and yelling. I tried to play over them but they just kept getting louder and shouting violent obscenities. Never in my life have I come across such rude people. She woke up crying wanting to leave. That moment, Yosemite totally ruined my chances to win over my one true love.

This place should be shut down and the owners fired.”

Wow, Kevin. I guess the cards just weren’t in your favor. She’s probably better off with that jerk who knows how to camp and sings better anyway.