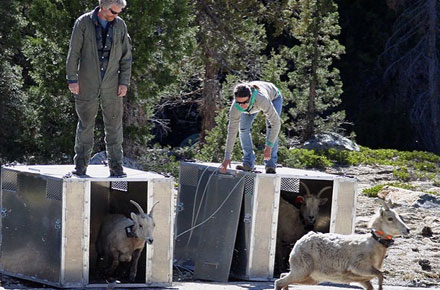 If you’ve ever been lucky enough to see a bighorn sheep in Yosemite then you’ve witnessed something very special that very few visitors ever see. But now that is all changing.

This week a dozen endangered Sierra Nevada bighorn sheep have been relocated to the Cathedral Range in Yosemite National Park, a move state and federal officials tout as a step toward restoring a rarely seen symbol of high altitude wild country.

Thanks to the California Department of Fish and Wildlife, Yosemite, Sequoia and Kings Canyon national parks, the Inyo forest, and the federal Fish and Wildlife Service, nine ewes and three rams were moved from the Inyo National Forest and Sequoia National Park to the Cathedral Range in Yosemite bringing the total to a little over 50.

A total of nine ewes and three rams were moved from Inyo National Forest and Sequoia National Park to the Cathedral Range, native stomping ground for the bighorn sheep which has been in steady decline since the 1850s when domestic sheep, hunting and disease began taking it’s toll on the once ubiquitous symbol of the Sierra. With only about 600 bighorn left in the Sierra, the Cathedral range offers the bighorn a near perfect environment to regrow the population.

Native bighorn were first reintroduced to Yosemite National Park in 1986 in Lee Vining Canyon, Stock said. Today there are 40 to 50 of them and they can sometimes be seen summering along the Sierra crest, on peaks including Mount Dana and Mount Gibbs, northeast of the Cathedral Range.

Photos courtesy of National Park Service – Yosemite via Instagram and California Department of Fish and Wildlife.