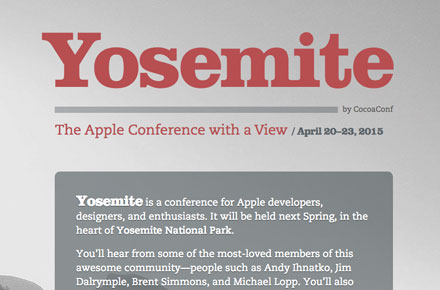 Got $1300 burning a hole in your pocket? Love Apple products and would love to sit and listen to people talk about them in a picturesque setting like Yosemite? Then the Yosemite conference is for you!

Set to take place April 20th-23rd, 2015, the Yosemite Conference being put on by Cocoaconf (not Apple) will take place at the Yosemite Lodge and feature talks by Andy Ihnatko, Jim Dalrymple, Brent Simmons, and Michael Lopp and many other notable Mac writers and developers.

There will be guided hikes, a photo walk with TED photographer James Duncan Davidson, and a Breakpoint Jam with James Dempsey.