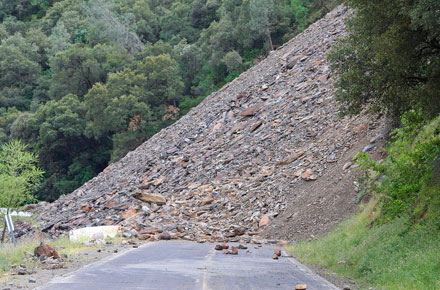 Final repairs to Highway 140 will remove the only stoplight in Mariposa County and allow two lane traffic to move freely along the Merced River into Yosemite.

The $133 million Ferguson Project will remove loose rock debris from the 2006 landslide, which covered the highway, and restore two-lane traffic between Mariposa and El Portal/Yosemite National Park.

The project, which is being funded through the federal Major Damage Permanent Restoration Program, will be split into two phases set to take place over the next 4 years.

The first phase, which consists of removing 113,000 tons of loose material, will start immediately and is expected to continue until September.

The second phase, which is expected to being in spring of 2015, is the construction of a 750-foot rock shed. The rock shed is designed to include two 12-foot-wide lanes, two 8-foot-wide shoulders and a 4-foot-wide emergency walkway on the river side and prevent small rocks and dirt from falling on the roadway.

According to Caltrans Director Malcolm Dougherty, the rock shed will be just the second structure of its kind in the United States.

Currently, drivers are held at 2 stop lights and then each lane is diverted across the river one at a time using two temporary bridges. Wait times at the light average 15 minutes but in long, hot, summer months and on busy holidays traffic can be backed up as much as a mile.