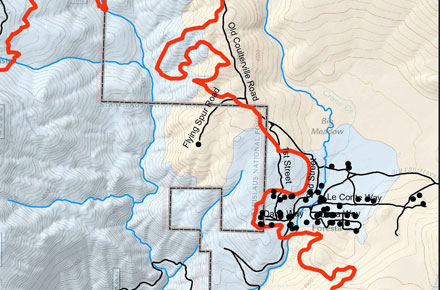 Here’s some info from the NPS regarding the status of all the fires burning within the park.

El Portal Fire: Firefighters have achieved 100% containment of the El Portal Fire and fire managers continue release resources. Interior smoldering and stump-hole fires will continue over the next few days. They are all within the perimeter and firefighters are now in the mop-up phase. Smoke will continue to be visible. As with any fire incident in Yosemite National Park, firefighter and public safety is our number one priority. We appreciate everyone’s assistance with this priority.
• The fire is currently 4,689 acres and is 100% contained.
• Resources assigned include 35 personnel.
• The fire is on both NPS lands and Stanislaus National Forest.
• On July 26, at approximately 3:15, the El Portal fire began in the community of El Portal.

Dark Hole Fire: This lightning caused fire began on July 17, 2014 in designated Wilderness, near the Yosemite Creek Campground. The fire is being suppressed by handline construction using minimum impact suppression tactics and natural barriers of granite ridgelines and out-croppings. Minimal fire activity is occurring. Minimal smoke production was observed.
• The fire is currently 862 acres and is 68% contained.
• Fire resources assigned include 61 firefighters
• The fire began on July 17, 2014 due to lightning.
• The fire perimeter is within Yosemite National Park designated wilderness.
• Yosemite Creek Campground is closed

Other Yosemite Fires – July Lightning caused fires
The Lembert, Starr King, and Cathedral are the only fires showing activity. These high elevation fires remain small and are smoldering and creeping through surface fuels. The Rancheria and Morrison fires are in patrol status after being suppressed. Elbow, Wapama, White Wolf, Lembert and all other fires have naturally gone out or are inactive. All of these fires continue to receive rain due to daily afternoon thunderstorms.