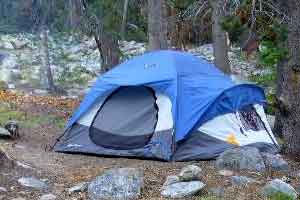 I’ve stayed in some really bad places in my time (assaulted by raccoons, Hell’s Angels circling our tent at midnight, Marine APC’s driving by the tent at midnight), but I’ve NEVER had it as rough as these people. Check out some of these hilarious bad campground reviews our friends at Adventure Journal found on Yelp.

Campground near Mt. Shasta, California
“There were pine needles EVERYWHERE in our site and in everyone else’s for that matter. Not only could that have been a fire hazard but it would have been nice to arrive in a CLEAN campsite. This is a small attention to detail that would go a long way.”

Campground in northern California
“People do not understand what the concept of a KOA is. Its not to go camping out in the middle of nature and take in the stars and see a bear walking around.”

Tuolumne Meadows Campground, Yosemite National Park, California
“We were told that they had wifi. What we weren’t told is that they have it configured so badly that it is impossible for anyone to access it. The ineptitude of this campground’s IT skills made my life incredibly difficult while staying there.

Head over to Adventure Journal to read the rest of the list. It’s hilarious.”