Photo of the Day: A view of Upper Yosemite Falls you’re not like to see again 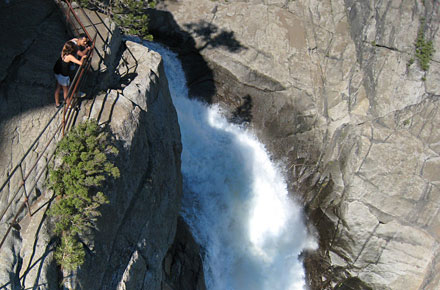 Tony Immoos turned me on to today’s Photo of the Day. Have you ever seen a shot with that angle before? No? You probably won’t see one anytime soon either. No, it’s not a drone. In fact, the photo is from way back in 2010 before drones (can we call them what they really are please, RC helicopters?) hit the scene. It’s a pole with a camera mounted on the end. In fact, it’s a carp pole used for fishing. Here’s a photo of one if you’ve never seen one.

The pole has the camera mounted at one end that’s tethered to a small video screen. Pretty ingenious. With today’s modern camera’s that have built in wifi that allows you to control the camera from your iPhone or iPad, this idea would be pretty easy to replicate. I’m not endorsing the idea, in fact, the thought of 80 people standing at the top of Yosemite Falls with 80 poles dangling over the edge looking like they’re fishing for carp is kinda horrific. Find your own schtick (pun intended). Get your own.

2 commentsOn Photo of the Day: A view of Upper Yosemite Falls you’re not like to see again