Where to Get Gas In and Around Yosemite 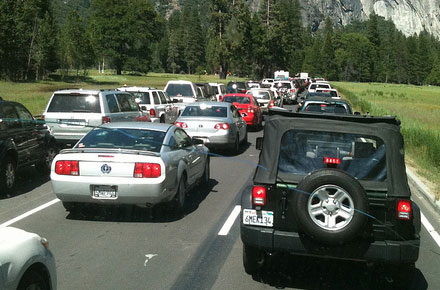 With Memorial Day coming up you can expect the park to be crowded. Unfortunately, this is California and the idea of public transportation just really hasn’t caught on so most of the visitors to the park come via their own car, truck or motorcycle. With all those cars that also means that you’re going to  have to get gas somewhere. But did you know there’s no gas IN Yosemite Valley for visitors? Nope, not a drop.  In fact, the nearest gas is miles and miles away so you’ll need to plan your trip accordingly. Here’s a list of places to get gas in and around Yosemite.

(Taken from Where to Get Gas in Yosemite)

Not that long ago fueling up your car in Yosemite wasn’t an issue then, in the 1980’s, stricter environmental standards came into effect in California forcing the gas stations in Yosemite Valley to close and their pumps and tanks removed. Today there’s only a 3 places you can get gas within the park if you’re a visitor and all are miles from Yosemite Valley.

No lie, gas in and around Yosemite is higher than what you’ll be passing as you drive in. Since there is NO GAS available in Yosemite Valley itself if you need gas you’ve got a bit of a drive ahead of you. Translation: PLAN AHEAD.

Gas stations are open year-round at Wawona (Hwy 41), El Portal (Hwy 140) and at Crane Flat (Hwy 120) and seasonally at Tuolumne Meadows (June through October) on the Tioga Road. Pay-at-pump service is available 24 hours-a-day with a debit or credit card at the Yosemite gas stations.

If something happens to your vehicle on the way in or while you’re in the park the Yosemite Village Garage can handle most major repairs. Emergency road service is available by calling (209) 372-8320.

Highway 120 (North Entrance)
Crane Flat gas station is on Hwy 120 about 16 miles out of Yosemite Valley at the junction to the Big Oak Flat Road and the Tioga Road. Although there are small gas stations located outside the Highway 120-Big Oak Flat entrance, Groveland is the nearest cheap gas on Hwy. 120 and is 49 miles from Yosemite Valley. The nearer store? Well, let’s just say you’re paying for the convenience.

Highway 140 (West Entrance)
The El Portal station is 14 miles from Yosemite Valley and well…it’s high, usually $1.00 per gallon more than the others. Unless it’s an emergency your best bet is to backtrack and head up the Big Oak Flat Road to Crane Flat gas station or, if you have enough gas, head on back to Mariposa (44 miles away) where it’s much less expensive.

Highway 120 – Tioga Road (East Entrance)
During the summer Tuolumne Meadows operates a card lock gas station. If you do travel the Tioga Road it’s a smart man (person) who tops off the tank before heading out. There is also a gas station at the junction of Highway 395 and 120 about 11 miles outside the Tioga Pass entrance. It’s not cheap but it’s usually packed none the less. On a good note it is down hill all the way from the park so if you’re low on gas it usually doesn’t take too much.

3 commentsOn Where to Get Gas In and Around Yosemite