Another Yosemite Hiker Rescued by CHP 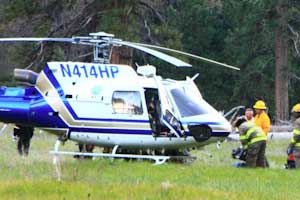 A 26-year-old hiker from Palo Alto is recovering at a Modesto hospital after suffering a 30-foot fall while hiking at Yosemite National Park, officials said.

According to the California Highway Patrol, dispatchers in Yosemite called for help with rescuing an injured hiker at 11:57 a.m. Sunday. The CHP sent its helicopter to the scene near Higher Cathedral Spire where they lowered two YOSAR team member to the injured hiker along a vertical rock face. After the rescue team prepared the hiker for transport, the helicopter returned and hoisted the man up.

Last week, rangers asked for help with transporting a woman who had fallen and hurt her back while hiking near Mirror Lake.