Photo of the Day: Half Dome and Milky Way by Kristal Leonard 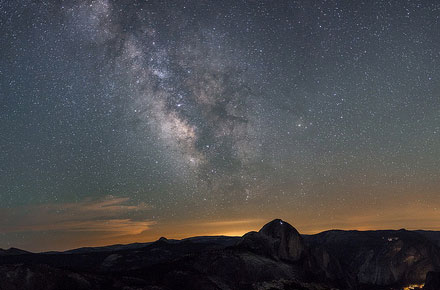 Today’s Photo of the Day is a beautiful shot from Kristal Leonard. Here’s what Kristal had to say about her photo:

Here is a panoramas I made from the top of Mount Watkins of the Milky Way over Yosemite. I’ll point out a couple cool features of the photo: all the way to the left is Cloud’s Rest and to the right of that is the Clark Range. That little hump in the middle is Mount Starr King and, of course, Half Dome to the right of that, with climbers on the face. On the right, you can see lights on Glacier Point, as well as lights from Yosemite Valley, mainly Curry Village. You can even see Washington’s Column and North Dome on the far right. The glow on the horizon is due to the light pollution from the Central Valley, including Fresno (behind Half Dome) and Merced (far right)

Photo by Kristal Leonard via Yosemite Blog Group on Flickr.

6 commentsOn Photo of the Day: Half Dome and Milky Way by Kristal Leonard