In Backpacking, Day Tripping, On the Trail, Safety, video 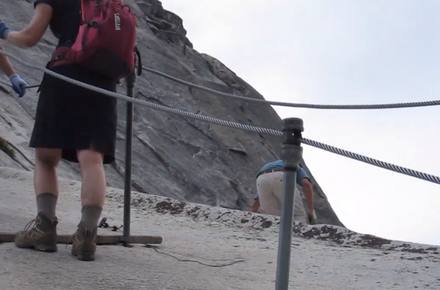 Whether you think the new permit system is too rigid or you think it’s the greatest idea since sliced bread, you need to watch the video as a hiker risks his own life for a cell phone battery he dropped.

It’s pretty apparent that the problem isn’t the amount of people climbing Half Dome, it’s the misinformation and hype that’s circulated over recent years that’s led people to believe it’s nothing more dangerous than a walk down Mainstreet USA in Disneyland. It’s not. It’s dangerous. People die for stupid crap like this. People die for NON-stupid crap. If you’ve never hiked this, do your research. This is a strenuous hike with a butt kicker of a climb up and down at the end. If you get hurt, you’re screwed. Help is a LONG ways away. The best thing you can take with you is your brain and common sense.