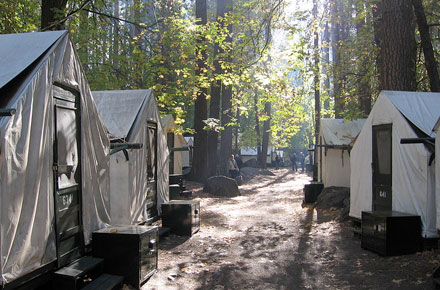 One of the 8 recorded cases of Hantavirus stemming from Yosemite National Park reportedly contracted the virus while staying in one of the parks High Sierra Camps not Curry Village, the area previously thought to be the only area affected by the virus.

According to the California Department of Public Health (CDPH) one of the eight confirmed cases of HPS stayed in multiple High Sierra Camps in Yosemite (a different area of the park than Curry Village) in July, and that the stay in the High Sierra Camps is the most likely source of that person’s infection.

Until now all the reported cases were believed to have stemmed from the “Signature Tent Cabins” in Curry Village in Yosemite Valley. Those cabins have been closed and visitors who stayed overnight since June 10 have been contacted by the park or DNC Parks & Resorts at Yosemite who runs Curry Village.

The National Park Service has received confirmations from federal and state public health agencies of eight cases of HPS linked to overnight stays in Yosemite since June of this year. Three cases have resulted in fatality; the five remaining individuals are either improving or recovering. The confirmed cases include six individuals from California, one from Pennsylvania, and one from West Virginia. The types of hantavirus that cause HPS in the United States cannot be transmitted from one person to another.