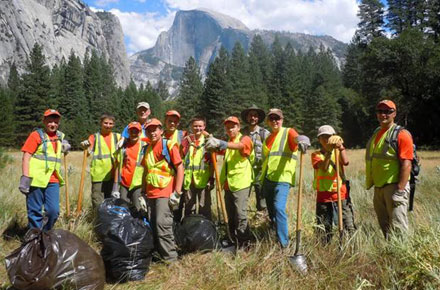 There’s been so much “doom and gloom” in the news over the hantavirus outbreak that we often overlook the good news. Here’s a story about a couple of boyscouts who took it upon themselves (and their boyscout troop) to help clean up Yosemite and maintain it’s natural beauty by removing invasive plants in the park. In case you didn’t know already, invasive plant species have long been a problem in Yosemite. The Central Valley and surrounding foothills are infested with plants who’ve made their home here, from somewhere else. Yosemite has an ongoing effort to identify and remove as many of the invasive species as possible to help maintain the natural beauty of the park.

Along with other members of Troop 465 Nathan and Bryce, who are in the process of earning the highly prized Boy Scout Hornaday Award, participated in a conservation effort removing invasive species in the valley floor of Yosemite National Park.