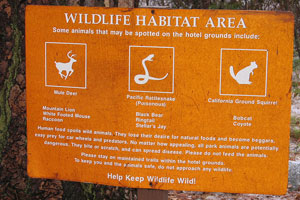 NPS – The recent diagnosis of hantavirus pulmonary syndrome (HPS) in two Californians, one of whom died, has prompted Dr. Ron Chapman, director of the California Department of Public Health (CDPH) and state public health officer, to remind Californians to take precautions to prevent exposure to the virus that causes HPS at their places of residence, work, and recreation.

“Hantavirus is a rare but serious disease spread by rodents,” Chapman said. “This disease can frequently become fatal, but there are steps you can take to reduce your exposure.”

Public health officials believe the two recent patients might have been exposed to mice droppings or urine that contained hantavirus while vacationing at Curry Village in Yosemite National Park.

With recommendations from CDPH, Yosemite National Park has increased routine measures to reduce the risk of hantavirus exposure to Park visitors. These efforts include regular thorough inspection and cleaning of rooms and cabins, exclusion of deer mice and other rodents from buildings, maintaining good housekeeping and sanitation levels to discourage rodent infestations, and public education.

Since HPS was first identified in 1993, there have been 60 cases in California and 587 cases nationally. About one third of HPS cases identified in California were fatal. The two recent cases bring the total California case count for 2012 to four. Case-patients have been exposed to hantavirus in many areas in California where deer mice live, particularly from the eastern Sierra Nevada region and at higher elevations.

HPS is caused by a virus that individuals get through contact with the urine, droppings or saliva of infected wild mice, primarily deer mice. Breathing small particles of mouse urine or droppings that have been stirred up into the air is the most common means of acquiring infection. The illness starts one to six weeks after exposure with fever, headache, and muscle ache, and progresses rapidly to severe difficulty in breathing and, in some cases, death.

When you are in wilderness areas or places that harbor mice, you can take the following steps to prevent HPS:

· Avoid areas, especially indoors, where wild rodents are likely to have been present.

· Keep food in tightly sealed containers and store away from rodents.

· Keep rodents out of buildings by removing stacked wood, rubbish piles, and discarded junk from around homes and sealing any holes where rodents could enter.

· If you can clean your sleeping or living area, open windows to air out the areas for at least two hours before entering. Take care not to stir up dust. Wear plastic gloves and spray areas contaminated with rodent droppings and urine with a 10% bleach solution or other household disinfectants and wait at least 15 minutes before cleaning the area. Place the waste in double plastic bags, each tightly sealed, and discard in the trash. Wash hands thoroughly afterward.

· If there are large numbers of rodents in a home or other buildings, contact a pest control service to remove them.