Yes, there are cougars in Yosemite 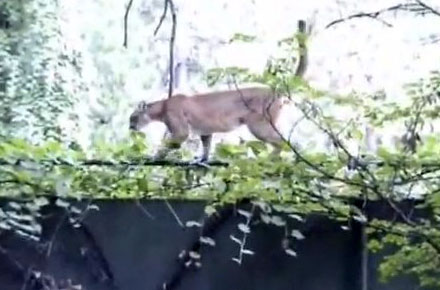 From way back in 1996, Perazul5 on Youtube caught this video of what appears to be a mother mountain lion leading a couple of coyotes away from her cubs. I think that’s a pretty good assumption judging by the cats behavior. I’ve never known a mountain lion to be afraid of coyotes…or anything else for that matter. In case you’re wondering where this one was filmed in proximity to humans, about half way through the video the cat jumps up on top of the tennis court fence behind the Ahwahnee.

Going to point out that more people are injured by mountain lion attacks in California than are hit by lightning. It’s been a while since I’d heard of anything in Yosemite though but don’t assume that makes you safe. If you happen to see on in the park while hiking:

KEEP CHILDREN CLOSE TO YOU. Observations of captured lions reveal that the animals seem especially drawn to children. Keep children within your sight at all times.

STOP! Do not run from a lion. Back away from it slowly, but only if you can do so safely. Running may stimulate a lion’s instinct to chase and attack. Face the lion and stand upright. Make eye contact. If you have small children with you, pick them up so they won’t panic and run. Although it may seem awkward, pick them up without bending over or turning away from the lion.

DO NOT BEND OR CROUCH OVER; DO ALL YOU CAN TO APPEAR LARGER. A person squatting or bending over looks a lot like a four-legged prey animal. Raise your arms. Open your jacket, if you’re wearing one. Throw stones, branches, or whatever you can grab without crouching down or turning your back. Wave your arms slowly and speak firmly in a large voice.

DO NOT APPROACH A LION, especially one that is feeding or with kittens. Most mountain lions will try to avoid confrontation. Give them a way to escape.

FIGHT BACK IF ATTACKED. Try to stay on your feet if a lion attacks you. Lions have been driven off by prey that fights back. Some hikers have fought back successfully with sticks, caps, jackets, garden tools, and their bare hands. Since lions usually try to bite the head or neck, try to remain standing and face the attacking animal.