Hate the Half Dome Permit System? Let’s talk about it. 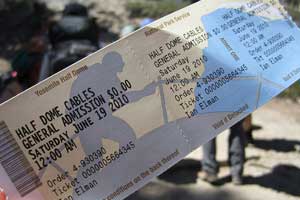 Glenn: “I just read your blog on the challenges with the half dome permit system and the ticket scalpers. Just wanted to share with you my opinion (which was not well received by the Park reservation system person I spoke with on the phone). First let me say I grew up in the Big Creek/Shaver Lake area and had the great opportunity to grow up hiking all the many wonderful scenic trails in not only Yosemite, but the entire wilderness back country area. Fast forward to the present, I now live in Texas and must travel a long distance to return to the mountains that have so many memories for me. Last year I tried to get a passes for my son and I to hike half dome and they were already all gone. No problem, we’ll go somewhere else and try again next year. This year I put in for 7 different dates (as allowed on the website) and recently found out I didn’t get a permit in their lottery for this year. Their advice when I called, come to the park and enter in the 2 day advance lottery where they will draw 50 permits each day. Yeah right, I’m going to fly to CA rent a car, hotel, etc just on the off chance I’ll really beat the odds and get to make the hike with my son. When I made the following suggestion to the park representative on the phone they got really nasty and called me an elitist. Well here’s how they could improve the process. First, raise the price to let’s say $15-$20 per person and make people pay as soon as they win the lottery drawing. Now let them cancel in advance (let’s say 3 weeks out) and get a full refund. Having to pay some money up front keeps only the serious people on the hike list. In the process they have today, permits for no shows go to waste and are not redistributed. Now that they know about how many open spots they have (the 50 two day lottery permits plus the cancels from the pre-season lottery), the Park service can put them out on ebay themselves and auction them off and let supply and demand run its course. That way, people from out of state, like me, can actually have some hope of ever be able to experience the climb with my son while he’s still living at home! The cost of having to pay $50-$100 each for a couple of permits really pales in comparison to the costs of planning an entire vacation to California to visit the park. At this point I have pretty much given up hope to be able to make this climb and my son and I will go climb a mountain somewhere else.”

So I responded to Glenn:

“Its a bad system but it was out of control and they had to limit access some how. The deaths you heard about where people fell from the cables over the past couple of years were because too many people were going up and people couldn’t safely come down. Holiday weekends would see thousands of people making the trek. Most of the people were ill prepared and out of control. While I agree that the current system in place isn’t the best it does offer all Americans regardless of financial situation the opportunity to access Half Dome and it looks like it is making things safer. I know, not what you wanted to hear. Try contacting Yexplore and see if they have permits you might be able to buy or sign up for their hikes. They’re a great outfit and if you take a guided hike you get paired with some of the most knowledgable guides around. These aren’t tour bus guides they’re hikers and backpackers who love Yosemite.

Oh, btw, have you tried the Clouds Rest hike? I think it’s a better view personally.”

Now I want to know how you feel. Do you feel the current system of requiring people to participate in a lottery for permits to climb Half Dome is fair? Tell us on Quora. What are your thoughts? This is your chance to sound off.

Don’t forget, while you’re on Quora sharing your answer give us a follow. We’ll be asking more questions and posting your responses on Yosemite Blog.

2 commentsOn Hate the Half Dome Permit System? Let’s talk about it.