Photo of the Day: The Great Snowcone, Upper Yosemite Fall by Rollie Rodriguez 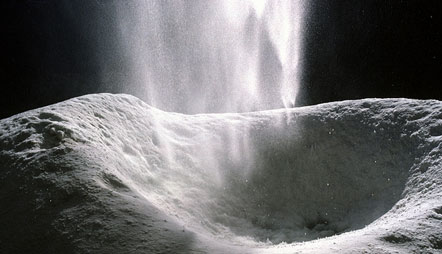 This photo is Photo of the Day based on the coolness factor alone. This is the Great Snowcone made by Upper Yosemite Fall. Yeah, the same one John Muir wrote about.

“In winter the thin outer folds and whirling spray of the great Yosemite Fall are frozen while passing through the air freely exposed, and are deposited around the base of the fall in the form of a hollow, truncated cone, which sometimes attains a height of 400 feet.

In the building of this cone, part of the frozen spray flows directly to its place in the form of minute particles like the dust of wind-beaten snow, but a considerable portion is frozen upon the face of the cliff along the edges of the fall and attains a thickness of a foor or more during the night. When the sun strikes this ice-coating on the cliff it is cracked off in large masses and built into the walls of the cone, while in windy, frosty weather, when the fall is swayed from side to side, the whole surface is drenched, dinding the whole mass of loose blocks and dust firmly together. While in the process of formation the surface is smooth, and pure white, the outlines finely drawn, the whole presenting the appearance of a beautiful crystal hill wreathed with clowds of irised spray, with the fall descending into the heart of it with a tremendous roar, as if pouring down the throat of a crater.” ~John Muir

Check out Rollie’s photos on Flickr where greatness abounds.