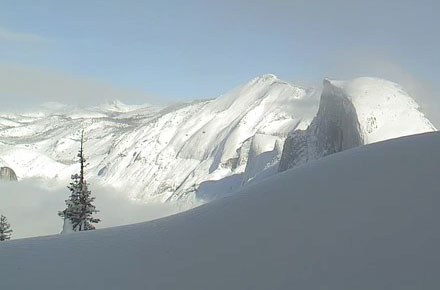 Jorma, the guy who makes the awesome time-lapse videos from the Yosemite Conservancy webcams, posted a photo on his website that mirrors exactly what I’ve been wondering the last couple of weeks. Where’s the snow?

No snow is great news for people looking to go through the higher passes (they’re all still open!) but it’s terrible news for those of us who rely on the Sierra snowpack for water, ski resorts who have yet to open, business who rely on the winter ski enthusiasts and hotels who are seeing people cancel their reservations because there’s still no snow.

Whether you believe in the “global warming” or that 2012 is the year the world ends there’s no denying that something is obviously going on. I’ve lived in this area for 40 years now and have been credited with having one exceptional memory and I can honestly say, I’ve never seen the Sierra without snow this late in the year.