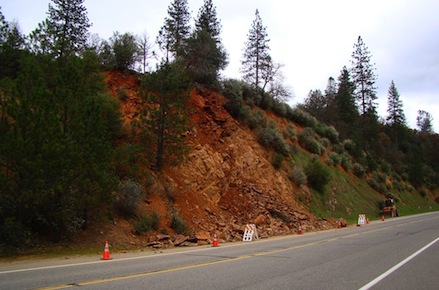 Garry Hayes, my former Geology professor, was on his way to Yosemite for a relaxing day off and caught a small rockslide along Highway 140 on video.

Headed up to Yosemite Valley today to see some waterfalls and enjoy the holiday. Had a wonderful time, but had an extra surprise. Got to see a modest rockslide on Highway 140 on our way there, and managed to catch it on video! We were driving down Highway 140 near Midpines on our way down to the Merced River when the new rockslide caught my attention. A lot of rock had already fallen, and given that there was a bulldozer parked on the other side, it was clear that the main event had happened a day or two earlier, but I decided I wanted a picture so we stopped and I hopped out.

As I approached the slide, I could see a couple of large boulders still perched near the top of the roadcut that looked unstable, and I could hear small pebbles bouncing down the slope. When I got closer, I realized the pebbles and cobbles were dropping out from under the larger boulders. The rock was slowly giving way and I had a suspicion (and yes, a secret hope) that it might be about to collapse. I moved the camera setting to video, and only a minute later I got lucky. I was standing across the highway, and luckily no cars were passing at the moment. A couple of the broken chunks landed on the highway

You can read the rest of Garry’s account, watch the video and learn about the geology of the Yosemite region by visiting his blog: geotripper.blogspot.com.