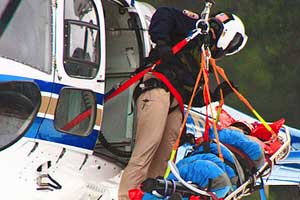 We’ve all seen those events where Engadget and or TUAW live blogs an Apple event. Edie Howe happened to be out shooting yesterday and did one better, she [live twittered[(http://twitter.com/edie_howe)] the rescue of an injured climber from El Capitan.

Just before noon yesterday Edie was alerted by the sound of helicopters to a possible SAR (search and rescue) and headed out with her ipad and camera to catch the action. Here’s the stream:

Edie: Climber is being put in cage/basket

Edie: Out of view due to trees at top of talus slope

Edie: CHP will airlift from top of talus slope