Time for a Smackdown! 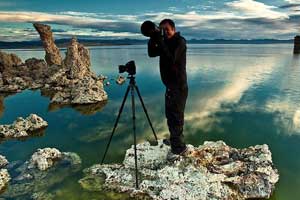 Mono Lake is as rare and endangered beauty as much as Yosemite is and it’s up to all of us to make sure it’s protected for everyone to see and experience. Evidently it wasn’t apparent to the photographer in the photograph who placed the value of the shot over the destruction he caused by climbing all over the Tufa.

I’m really thankful though we have people like G. Dan Mitchell who took the time to champion the lake and educate about photographers having proper respect for such a fragile environment. Thanks, Dan!

It looks like comments on the photo were closed on Facebook so I’ll direct my comment to the photographer Deryk who said, “on that morning I’ve seen a minimum of 100 photographer walk and climb all over these tufa stones”. I’d like to see any photos you have of 100’s of photographers in the 3 hour period you were there climbing on the tufa because as many times as I’ve been to Mono Lake I’ve never seen anyone, ANYONE, climbing on the tufa. And this includes before they built a fee station, before the boardwalks were put in, before rangers even patrolled the area.

The pamphlets and the bulletin board at the ranger kiosk ask visitors not to touch, walk or climb on the tufa.

One commentOn Time for a Smackdown!