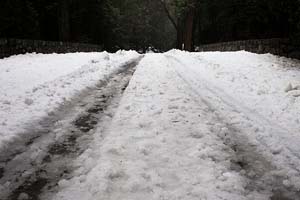 This weekends big winter storm that came through brought with it lots of rain and a good amount of snow prompting Yosemite officials to close Tioga Pass for the 4th time this year. The pass traditionally closes after the first good winter storm and remains closed until late May or early June of the following year.

The section of the Tioga Road closes from Crane Flat to 5 miles west of it’s junction with US 395 at Mono Lake. The next closest pass traversing the Sierra that is open all year is Highway 88 – 100 miles to the north.