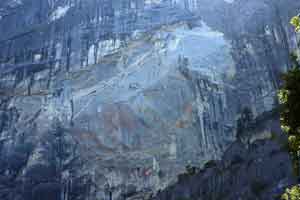 If you were one of the brave souls who decided to fight the crowds for a spot to camp in Yosemite last Friday night (Labor Day weekend) then you got a rare treat for your efforts, a rockslide. A small rockslide occurred behind Curry Village Friday night, September 3rd. The rocks tumbled down from the same area where a larger rockslide had occurred several years ago causing widespread destruction in Curry Village and the closure of several cabins. No injuries or damage was reported.

Thank you to everyone who sent me information on Facebook and in emails and to Mike Reeves for sending in this photo of the release point.