An End to a Journey 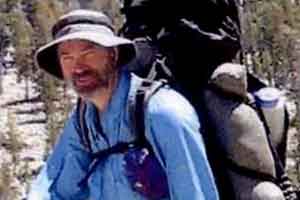 I’ve been writing Yosemite Blog for a long time (since 2004) and along the way I’ve met some really great people. One of these people is Martha Claassen. Martha contacted me not to share a photo or a story of a bear raiding her food, but to share a personal tragedy and to ask for my help. You see Martha’s husband Fred had gone backpacking in Yosemite and never returned.

Fred Claassen was an avid outdoors man. He was fit, healthy and well versed in backcountry life. In the summer of 2003 Martha and Fred returned from backpacking in the Ansel Adams Wilderness. Fred, having 2 days left of his vacation, decided to spend the last couple of days in the North Eastern part of Yosemite and head for the Sawtooth Range while Martha stayed at home.

Fred entered the Hoover Wilderness from Twin Lakes on Thursday, July 31, 2003 for a short hiking trip to Crown Lake before traversing to Mule and Burro passes and return to Twin Lakes cross-country via Matterhorn Pass and the Horse Creek drainage. Fred was last seen at Crown Lake that Friday, August 1st, but never heard from again.

Searchers scoured the region Fred was last reported in for days with no sign of the missing backpacker. Martha began posting fliers in the area and writing to bloggers, posting on hiking forums and telling anyone she could about her husband in hopes they might help find clues to his disappearance.

Years passed and Martha continued to search for her missing husband and even took a job in Lee Vining close to where Fred had last been seen.

Martha reads Yosemite Blog and has become a good friend. This past Saturday I was shaken to receive my first email from her in a while, Fred’s remains and gear had been found 1/2 a mile from Burro Pass by a hiker.

Evidence at the scene and to the remains indicated that Fred might suffered a tremendous fall.

Our deepest sympathies go out to you and your family, Martha. You’ve gone through so much over the past 7 years. I’m glad you’ll finally be able to find some closure. Please let me know if you need anything.