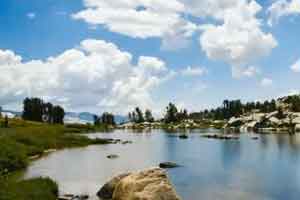 Here’s a great time lapse of Yosemite by one of our favorite contributors, Sathish Jothikumar

Every summer afternoon, like clockwork, the ominous clouds towering over the the spine of the mighty Sierra Nevada in Yosemite National Park brew a fresh new thunderstorm. Winds blow aghast at the higher elevations, foreboding the impending conglameration of the low-pressure moisture-laden atmosphere, ready to dump its next load into the innumerable valleys separated by granite peaks towering into the sky.

To the average mountain dweller (read the pikas, the marmots, the deers and the bears), this is an everyday occurence to which they respond by heading out to hiding places under rocks and vegatation. But we puny humans (like me) try to seek out the highest point possible if only to capture the flow of water vapor – not an intelligent move!

The motion of clouds is quite mesmerizing. As it swirls and bubbles and expands and contracts and moves across the polarized deep blue sky, it creates patterns that, while seemingly motionless to the naked eye, when sped up under the guise of a timelapse, reveal its true form – an ever morphing articulation that like an amoeba never stays still even for a second. Observing its motion high in the thin atmosphere of the Sierras and trying to capture its fluid advance is something that I am drawn to like a moth to bright lights!

Here are the results from a weekend of shooting in the High Sierras while trying to acclimatize for a peak bagging the week thereafter. These were from two hikes, one to the top of Cloud’s Rest in Yosemite and the other to the backcountry region of Gaylor Lakes.

Awesome video, Sathish. Thanks for adding it to the Yosemite Blog Group Pool.