Photo of the Day: Room with a View by Joshua Cripps 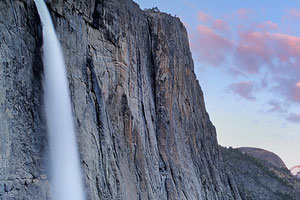 Today’s Photo of the Day is a great shot by Joshua Cripps (www.joshuacripps.com). I like posting photos where the photographer writes a nice long caption. It not only makes my job easier but you get to learn a little bit about what it took to make the photo. Here’s what Joshua had to say about his photo:

Spent last Saturday in Yosemite teaching a one-day workshop in Hetch Hetchy. The rest of the weekend I tooled around the Valley trying to find unique viewpoints (something which is difficult in a park which receives over 3 million annual visitors). A video of Upper Yosemite Falls I watched earlier in the week gave me an idea for a shot which included the Falls as well as Half Dome.

I didn’t know exactly where to shoot from so at about 6:00 pm I headed out along the Upper Yosemite Falls trail to try to find a spot. After two miles or so I got my first glimpse of the upper falls. And while the view was both impressive and amazing, I realized I need to get much higher for the shot I wanted. Up and up I continued.

I quickly realized that the trail was taking me way too close to the falls and that there was no way I was going to find the vantage point I needed before the light failed. Seeing that an opportunity for a different photo lay before me, I climbed about 50 feet up the rock wall opposite the falls in order to get out of the bushes. It was a little sketchy climbing with all my camera gear, but I eventually made it up to a small ledge where I could get a clear composition.

Then I fired off a few quick shots and climbed back down the cliffs before the light disappeared. And boy does that sound a lot easier than it was … 🙂 Then it was just a three mile hike in the dark back down to the Valley.

So anyway, this isn’t the exact shot I had envisioned and would like to go back to try achieve something closer to my vision, but I worked hard enough to get this image that I figured it was worth posting.

If you like Joshua’s photo be sure to check out his website for other great photos and his blog for what he’s been up to (he’s got some really awesome ocean shots on both.)